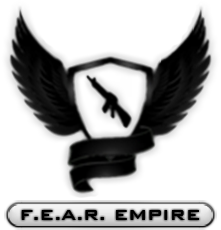 Forum back up and running to full capacity!
Welcome to the F.E.A.R. Empire Forum!
Our group is on ROBLOX: http://www.roblox.com/My/Groups.aspx?gid=72321
Use Hashtag #FEAREmpire on Twitter! 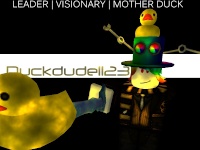 Hey, guys. This is a forum which will be posted later today on ROBLOX to see feedback. I've run it by EA, if it gets positive feedback, it will be reality. I want to test it early and post here, though. Thoughts?

[[NOTE: This is a test document to gain feedback for a potential new First Encounter Assault Recon Coalition]]

◆Hello, F.E.A.R.! I am here to introduce a proposal for the First Encounter Assault Recon, to in essence, re-do the Tri-Clan, and introduce a new coalition, a more stable one, and one, unlike the Grand SuperClan Coalition, that does not shut down after a major ro-war in waiting for the next. I want to propose one that is active, one that communicates with one another, and, makes everyone a stronger and more united clan.

◆ I would like to inform everyone, this forum has already gone through Advisor of External Affairs, Sickthunderkiller, and is almost a ‘test forum’ to view the opinions of other members on this idea. Sickthunderkiller is looking for feedback in this forum as to whether the idea should be enacted. This, if all goes well, will come into effect soon, as the Grand Coalition of Unity. (this is an extremely early prototype of the name, please don’t spam the comments describing hate for the name. If it is bad, no worries, it will be fixed).

◆ The idea centers on creating almost a United Nations, per say. Ever since the Roblox Assault Team declared war, we have realized, our approach in maintaining alliances is just not going to work. We needed a change. We needed to prove our worth. We began the Tri-Clan, but as I will explain, it never sustained. Why?

The Tri-Clan restricted the First Encounter Assault Recon, and all parties, to three permanent members. It restricted our power, and the influence, of this ‘alliance’.

The Tri-Clan was poorly sustained in a fashion which promoted the First Encounter Assault Recon doing the heavy lifting. While the ROBLOX Special Forces performed well along with us, the three allies never meshed well, nor spent time meeting.


◆ The Coalition of Unity would focus on not just being a wartime group, like the Tri-Clan, or even the long-dead Grand Superclan Coalition. I find this ineffective, as the chemistry between these clans in non-wartime basically dies. In the Coalition of Unity, there would be a few, specific changes.

NOT ALL ABOUT WAR: It wouldn’t be all focused on war. The Coalition of Unity is focused on supplying the clan, and it’s participants, with a healthy relationship, and a win-win scenario. The Coalition of Unity will have weekly summits, or meetings, with allied leaders to discuss the happenings in the clan-world, and if the coalition needs to step in, in one way or another. It would then move on to individual clan topics, in case one clan needed support doing something, etc. These meetings are used to promote good connections, as well keep all clans up-to-date on their respective statuses. Emergency summits may be called at any time, if a major event occurs in the clan world requiring immediate response from the Coalition.


MEETINGS: In more depth, the meetings would also focus on important topics, like declaring war, or entering wars in specific stances, such as neutrality and defense only, or whatnot. For example, if you wanted to declare war, the coalition would need a unanimous vote, for it is critical to have all clans on-board, and united, if entering a war, or trying to stop a hostile threat to the coalition’s well-being.


STRENGTH: The Coalition of Unity is more specifically wired to give strength to all clans involved. The Tri-Clan largely failed in this aspect, due to soldiers fighting with all different techniques, arguing amongst one another. The lack of chemistry was evident. In this program, clans can learn fighting techniques and tips from one another, as well as train together, defend and practice raid together. This will make the Coalition a truly unified fighting force, not a bunch of guys like an Odd Couple just being forced to fight with one another.


COMMUNICATIONS AND CONNECTIONS: F.E.A.R.’s reputation largely has been, well, horrid amongst other clans outside of us. We have not been able to, in the most part, reel in attractive allies, and if we have, we have failed to maintain the relationship. This Coalition promotes ACTIVITY. Activity is the downfall of F.E.A.R. in most, if not all of the alliance breakdowns, as in the past, clans have been frustrated, and wanting to talk with F.E.A.R’s external affairs department, which seemed to be out for lunch -- permanently. Alliance chatrooms have been made, to make the coalition almost be like filled with ‘minutemen’. We can now be ready to defend and raid on the spot. A good outcome here, can provide us with great allies in the future. It’s almost like recruiting.


COUNCIL: Think of the United Nations. This Coalition isn’t just focused on war. We want to avoid war, at times. Peace is a priority. The main difference, though, is that we will have one main council, with FOUR permanent members (number subject to change) and SIX flex members, maximum. “Flex” members refers to members which may be voted out with a unanimous vote by the permanent members of the council.

PEACE: As touched on in the previous subsection, the coalition will focus on peace, and being almost peacemakers. We don’t want war 24/7. We want to make the clan world a great place to be in, as well as be recognized as a universal force. Declaring war on every clan to boost our egos, is not the route to go.

FUN: Members of this Coalition will be like F.E.A.R.’s family. With sponsorship of the Department Of Events, the Coalition members will also participate in fun events with the First Encounter Assault Recons. They are all our second family, we appreciate them, have fun together, fight together, learn together, and grow together.

EVALUATION: While we consider the allies our best of friends, our family, we need to make sure they do not slack off. All Coalition members, including the host, the First Encounter Assault Recon, will undergo a monthly impartial investigation from outside sources, of classified methods, to make sure everything goes swimmingly.

As of current, and I think this should be self-evident, all of the First Encounter Assault Recon’s allies are in this coalition.

*DISCLAIMER: This is accurate and portraying AS IF the coalition was released, which it has not.

The Coalition’s sustainability will be the mandating of activity. As researched by the author, most coalitions in the clan world, just become inactive and die. For F.E.A.R., specifically, the Director of External Affairs has not been active enough for his duties, enraging allies. Active and energetic leadership has entered, and F.E.A.R., while hosting the actual coalition, will not be exempt from the activity laws. If the laws are breached, the leadership will be expected to change. The Coalition is a flexible one, and one of infinite possibility. Due to us leaving the door so wide open, we allow a ton of wiggle room, for our survival.

That is that. This, remember, is a proposal, to see feedback and ideas on such a coalition. If receiving of positive feedback and praise, the coalition will be soon put into effect.


(If such coalition comes into effect, just a notice to outside clans, the First Encounter Assault Recon WILL be looking for further alliances with other clans)

(Credit is given to the author) 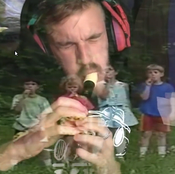 I see you have plans for a new coalition to keep up. Just make sure you do a lot of joint things with the coalition and make sure to kick out members of the coalition if they don't do jack squat to help it in any way.

And then this will succeed unlike the hundreds of other coalitions that just died after a couple wars and disagreements began to flare.

Activity and good relations is key.